Members of the Inspectorate

There are three members of the Garda Síochána Inspectorate – a Chief Inspector and two other members. The Inspectorate is assisted in its work by a team of support staff.

The Garda Síochána Act 2005 states that members of the Garda Inspectorate must have served as a senior officer in the police service of another state or have relevant experience suitable to the position. A member or former member of the Garda Síochána cannot become a member of the Inspectorate. Mr. Mark Toland, formerly of the London Metropolitan Police, was appointed Chief Inspector from 6 November 2017. There are two Deputy Chief Inspector (member) posts, one which is held by Ms. Pauline Shields and the other by Mr Alywin Barton, both of whom formerly served in the Police Service of Northern Ireland.

The Three Members of the Inspectorate 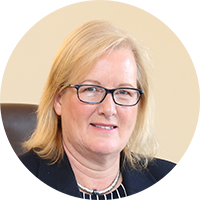 Ms Pauline Shields was appointed as a Deputy Chief Inspector of the Garda Síochána Inspectorate in October 2016. Pauline served for 30 years with the Royal Ulster Constabulary and Police Service of Northern Ireland, in a number of operational and headquarters roles up to and including Chief Superintendent.

In her most recent posting she was responsible for the delivery of uniform policing across PSNI’s South Area, and had a key role in the strategic change programme which led to the most significant restructuring of the PSNI since its creation in 2001. Throughout her career, she has worked extensively to build relationships with partners, communities and their representatives and in doing so, has contributed to improving trust and confidence in policing.

Pauline has been responsible for a number of major operational deployments in her capacity as a Public Order and Firearms Commander. She was the silver commander for the 2013 G8 summit in County Fermanagh, described as the most peaceful summit in its history.
She played a lead role in the delivery of mobile technology and in the Estate Strategy for the PSNI. Pauline also served as a board member on the Police Rehabilitation and Retraining Trust, representing the Chief Constable.

In the 2014 New Year’s honours, Pauline was awarded an OBE for services to policing and the community in Northern Ireland. Mark previously served as a Deputy Chief Inspector of the Garda Síochána Inspectorate from June 2012, a position he held for four and a half years. During that time, he was the lead inspector for several important inspections including the Crime Investigation, Changing Policing in Ireland and Responding to Child Sexual Abuse reports.

He joined the Metropolitan Police Service in 1980 where he served for 30 years prior to relocating to Ireland with his family in 2010. At one stage he was responsible for training student officers and managing in excess of 4,000 new recruit officers.

As Chief Superintendent, he spent a total of seven years managing three busy, diverse and challenging London boroughs. While at one of these boroughs, Brent, he led several major undercover operations that dismantled organised criminal gangs that were involved in serious crime. During his career he was also responsible for the security and policing of large scale public order events at Wembley Stadium, Lords Cricket Ground and Twickenham Rugby Stadium.

Mark is passionate about helping the Garda Síochána to enable them to deliver excellent policing services across Ireland, and in particular, to ensure that they protect the most vulnerable and those at most risk of harm.

In 2010 Mark was awarded the Queens Police Medal for distinguished police service. He was awarded a Diploma in Achieving Business Excellence from Newcastle College and completed a research course at Cambridge University. Mr. Alywin Barton was appointed Deputy Chief Inspector of the Garda Síochána Inspectorate in November 2021. Alywin served for over 38 years in the Royal Ulster Constabulary and Police Service of Northern Ireland. Throughout his career, he has worked in a variety of operational and change management roles including the Operations Superintendent for the PSNI South Area and most recently as District Commander for the Fermanagh and Omagh District. During these appointments, he was the joint lead with a Garda colleague for the Rural Crime strand of the Cross Border Joint Agency Task Force.

He led the operational delivery of the biggest change programme undertaken by the Police Service of Northern Ireland since its creation, coordinating the multiple workstreams and successfully delivering the 10 phases of the change programme within the 11 month deadline.

His entire service has been focused on enhancing trust and confidence in policing by working with communities to identify their needs and deliver relevant community-focused policing. He worked with the Northern Ireland Policing Board to design and deliver the only public consultation into the delivery of local policing undertaken by the Police Service of Northern Ireland. Alywin and his team used both conventional and new technological methodology to attract a high level of engagement and credibly inform an action plan which was used to guide the future delivery of policing in Northern Ireland.

Alywin has worked as a Public Order and Firearms Commander for many years, during which time he commanded a variety of operational deployments including the two occasions the World Rally Championships brought Rally Ireland into their competition, public order deployments, and a broad variety of visits and sporting events.

In the 2018 New Year’s honours, Alywin was awarded the Queen’s Police Medal for distinguished police service.

Staff Support Team in the Inspectorate